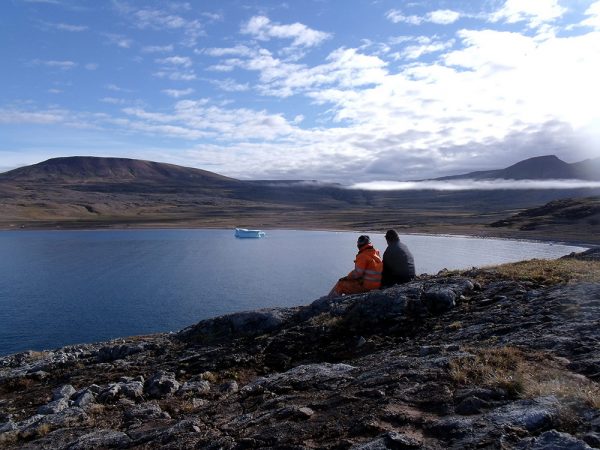 Nunavut means “our land” in the Inuktitut language, and is the newest Territory in Canada, created on April 1, 1999. Size, weather, isolation, and a sparse population all pose challenges for this, the nation’s youngest government.

Nunavut spans three time zones, and is 1/5th of Canada’s national landmass, and just over 1/1000th of the population of Canada. There are only about 6,000 residents of Iqaluit, the capitol of Nunavut.

Winter lasts from September to June, and there are no permanent roads between the communities, mostly due to weather conditions in the snowy months. The only consistent form of transportation of goods and people is by air. Some communities have ports and rely on marine transport as well. The solution to many of these challenges is being met with a reliance on old and proven methods of living in the Arctic.

Due to a population that is 85% Intuit, the respect and importance given to the traditions of Nunavut’s founding people can be seen throughout this young territory, in more than just the name. “Intuit Qaujimajatuqangit” is the Inuktitut phrase for the traditional knowledge, values, and wisdom that are the guiding force behind the new government and the people of Nunavut. The Consensus form of government used in Nunavut is a blending of parliamentary democracy, and traditional tribal government. The citizens are represented by MLAs (Members of the Legislative Assembly), who then choose a Premier and the Ministers, and the Premier then assigns portfolios. An MLA can be any resident of Nunavut, and runs on an individual rather than a party platform.

The court system is unique to Nunavut as well, as it has the only single-level court system in Canada. The court in Nunavut has jurisdiction over all criminal, civil, and family matters. The government has made a commitment to decentralize as much as possible, which is a reflection of Nunavut’s dedication to serving such isolated communities in the most effective way.

Nunavut’s fledgling economy is based on mining, fisheries, tourism, and Intuit art. The government is still the largest employer, but is encouraging rapid, responsible growth in these other industries; tourism being one of the fastest growing because of Nunavut’s unique natural beauty.

Except for the far Southwestern “corner” of the territory, Nunavut is primarily tundra, which means there are virtually no trees in the Territory! The Canadian Shield, located under most of Nunavut, lends fiords, granite cliffs, and a rare beauty to Nunavut’s landscape. Much of the Territory is within the Arctic Circle, which means it is technically a desert, with less than 200mm of rainfall per year. The geography and weather support a diverse and unusual selection of wildlife, including herds of Caribou and Muskoxen, Polar Bears, whales (Beluga, Narwhals, and Bowheads are the most common) and Arctic Fox, all can be found in Nunavut. Vegetation grows low to the ground, but there are many species of beautiful flowers, berries, and mushrooms to be found. The world’s largest contiguous wetland, the Hudson Bay Lowlands, is in Nunavut, and supports a wide variety of wildlife.

Like the government and the Inuit traditions, the land itself blends old with new. The Canadian Shield and glacial deposits are hundreds of centuries old, but some of the land in Nunavut has seen barely 1500 years of sunshine, only recently uncovered by receding ice. In fact, the “new”release of weight from ice pressing down on the land is actually causing the landscape to slowly rise; even today. Whether the world is watching closely or not, Nunavut is evolving, changing, as a Territory, and as a beautiful Arctic landscape. I for one am fascinated to watch what happens next, to both the land and the people of Nunavut.