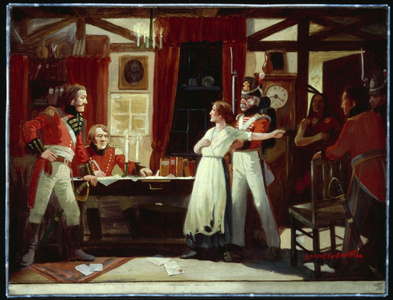 There are few women recognized in our history, which makes Laura Secord an even more important role model.

Born an Ingersoll, in Massachusetts, Laura’s father didn’t want to live under the U.S. government of the day, so the family moved to Southern Ontario (then called Upper Canada). Given a land grant in Queenstown (near Niagara Falls), the Ingersolls began their new life.

In time, Laura married James Secord; hence the famous name of a famous woman was born. James was a merchant, but he also volunteered in the militia.

The War of 1812, was a war between the British (Canadians) and the United States. It was this time period that permanently established the borders that run the length of both countries. The Americans were pushing into Upper Canada, and on June 21st, 1813 a group of soldiers took over the Secord home in Queenston, Upper Canada.

Perhaps Laura’s first act of personal courage precedes the one she’s most known for. When her husband was wounded in the Battle of Queenston Heights (shoulder and knee), Laura found him in the battlefield, brought him home, and began to tend to his needs. But Laura was forced to cook, serve, and clean up after the intruders too. She also gave them plenty to drink. As the evening wore on, the soldiers began to talk of their plans. Perhaps they did so because of the alcohol or perhaps they knew that James Secord was not a threat.

Laura overheard Colonel Boerstler’s plan to surprise Lt. Fitzgibbon at Beaverdams. She knew the Niagara peninsula would fall into the American’s hands if the British were not warned of the impending invasion.

Our heroine began to hatch her plan at that moment. As she had spent the day serving American officers, their General granted her a pass to be out after curfew (on the excuse that she wanted to visit her sick sister-in-law). She and her oldest daughter took a basket of food to St. David’s farm, and there she shared with her sister-in-law what she had overheard from the American soldiers. It was then that the two Secord sisters left the children in care of Laura’s daughter, and set off to warn a Canadian Lieutenant about the upcoming ambush.

Although there is some conflict as to how she got there, the truth is that she did – by walking 20 miles (32 km). It was an arduous and dangerous journey…

The two got lost in a swamp and were confronted by Mohawks. At that point, she was exhausted. Still, she managed to convince the Chief of the importance of her mission, by explaining that “many big knives were coming” (a term used by First Nations peoples to refer to the Americans). Laura set out again without her sister, but with an Indian guide, toward the DeCew farm where Lt. Fitzgibbon was.

As a result of her courageous act that night, all but 6 of the American soldiers were captured.

The Horseshoe Falls and the fertile soil of the Niagara Peninsula are still proudly, Canadian.

In mid-June of 2011, the Laura Secord Homestead opened, in Queenston, Ontario. Open from early May to Labour Day seven days a week (and then for limited hours to mid-October), you can visit this famous woman’s home yourself. The cost is nominal (about $10 for adults). To find out more about this attraction please visit http://www.niagaraparks.com/heritage-trail/laura-secord-homestead.html.

The year 2012 is the bicentennial of someone who Prime Minister Stephen Harper has called Canada’s most famous war hero. Different celebrations will take place, but perhaps the largest and most significant movement is lovingly fostered by The Friends of Laura Secord. This organization’s president and founder is Caroline McCormick, and she’s a direct descendant of our famous heroine.

Perhaps no words about Laura Secord are as poignant as the ones recorded by Lt. Fitzgibbon:

“The weather on the 22nd day of June, 1813 was very hot, and Mrs. Secord, whose person was slight and delicate, appeared to have been and no doubt was very much exhausted by the exertion she made in coming to me, and I have ever since held myself personally indebted to her for her conduct upon that occasion…”
Lieutenant James Fitzgibbon in an 1827 letter

Images are courtesy of the National Archives & Canada Post