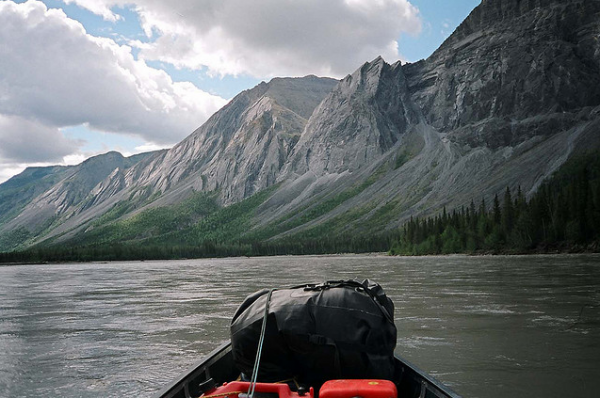 The Northwest Territories is located in Canada’s north and is situated between the Yukon Territories and Nunavut. It is 3,560 kilometres from the 60th parallel, the border of British Columbia, Alberta & Sakatchewan to the North Pole and 4,256 kilometres from east (Nunavut) to west (Yukon).

Two distinct geographics regions make up the Northwest Territories. First, there is the boreal forest. Boreal is a term relating to a forest in the northern North Temperate Zone that is mostly coniferous trees such as pine, spruce and fir. Referred to as taiga, it is the more southern “treed” portion of the area.

The second area, known as the tundra is obvious from the stunted vegetation and rocks. The cold climate does not allow for a long growing season and although plants may be many years old, they are significantly smaller than their southern relatives.

The two large lakes, Great Slave and Great Bear are so deep that sonar cannot reach the bottom and most of the water in the Northwest Territories can be consumed without being treated or filtered first.

Over 50% of the population is Aboriginal. The Dene people can be traced back 10,000 years. The Dene travelled the great waterways to hunt caribou and other animals.

It is believed that the Inuit crossed the Bering Strait about 5000 years ago. Explorers from Europe visited in the late 1500’s and the 1700’s brought fur traders to the region. There is a consistent population of Metis, who are descendants of the French Voyageurs or fur traders and Cree or Ojibwa women. In 1789, the explorer Alexander Mackenzie investigates the longest river in Canada, which was ultimately named after him.

In the 1800’s people came to the territories looking for whales to hunt.

In 1870, the British passed land to the Dominion of Canada. This land included everything north and west of Manitoba. The southern boundary was defined in 1920 and NWT was divided in 1999 to form the new territory called Nunavut.

The 1930’s increased the population when gold was found and Yellowknife began to grow into a city. The gold mining is being depleted but the diamond mining industry is growing. The first diamond mine in North America was opened in 1998. There are now 3.