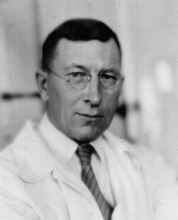 Sir Frederick Banting, with John James Richard Macleod, won the Nobel Prize in 1923 in Physiology or Medicine for the discovery of the hormone insulin.

Banting began to test his theory in May 1921. Dr. C.H. Best became Banting’s assistant because he had experience in biochemistry and physiology (he had recently graduated from the University of Toronto). What they didn’t realize was this theory had been tried unsuccessfully in the past – in retrospect Best felt Banting’s surgical expertise made the difference.

Through experimentation on dogs, they found the dogs were able to metabolize glucose when injected with a solution they had prepared from tissue called islet of Langerhorns. (They had removed the dogs pancreas in order to cause diabetes)

Testing on humans commenced in 1922 with successful results. Diabetics previously facing starvation and death now had hope for the future.

Fame followed shortly thereafter for Banting and Best. Banting shared his Nobel Prize with Best, feeling that he should have been officially recognized as well. The award was also given to another collaborator, Macleod, the Director of the Physiological Lab in the University of Toronto where the process of insulin extraction was developed.

Banting was coordinating the National Wartime Medical Research effort during WWII when he was killed in a plane crash in Newfoundland in 1941.