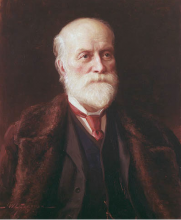 Prior to standard time, the world told time by the position of the sun. Noon was when the sun was directly overhead. This method worked well for individual towns but it was not convenient for Sandford Fleming.

Fleming was the Chief Engineer of the Canadian Pacific Railway and he found the existing times chaotic for organizing trains, their arrival and departure times. Passengers would carry several pocket watches, each one labeled for a different city. Station-masters also found it inconvenient.

Fleming felt the solution to his railway woes was the adoption of a universal method of time that would work in Canada and around the world. he first publicly presented this idea while lecturing in Toronto at the Canadian Institute for the Advancement of Scientific Knowledge. He recommended 24 time zones, world wide.

As with most new and unique ideas, it was rejected by governments and scientists. Some people even felt he was interfering with nature and God, they called him a Communist! Through Fleming’s explanations and tenacious attitude, official approval came and standard time went into effect on January 1st, 1885.