Sir Alexander Mackenzie — knighted in 1802 by King George III (as Knight Bachelor) for achievements in exploration — was born in 1762 in Stornoway. Stornoway is on the isle of Lewis in the Outer Hebrides of Scotland. One of his greatest, grandest explorations and claims to fame was that his east to west crossing of North America (north of Mexico) predated the Lewis and Clark expedition by a decade.

Mackenzie had an older brother and two sisters. His father was Kenneth Mackenzie, and his mother was Isabella Maciver.

In 1774, part of his family moved to New York (Kenneth left his daughters behind). Both his father and uncle, John, joined the King’s Royal Regiment of New York. Kenneth became a commissioned lieutenant in 1776; he served until 1780 (he died suddenly at Carleton Island, N.Y.). Alexander, the young man who was to become the famous explorer, was left in the care of his aunts. In 1778, as life in the Mohawk Valley became difficult for loyalists, Alexander was sent to Montreal to attend school.

At the time Mackenzie arrived in Montreal, it was already established as the center of American fur trade. In 1779, as a young man of only 19 years, he began working in the trade as a clerk for Finley and Gregory, later to be administered by Normand Macleod, and still later, in 1787, to be merged with their rival, the North West Company.

It could be said that Mackenzie’s penchant for arduous and dangerous explorations has its routes in his working for what would be part of the North West Company. He was offered a partnership in the company if he would agree to travel west. He did travel west, and it didn’t take long before he began his first search for the Northwest Passage…

Travelling to Lake Athabasca (now, northeast Alberta) in 1787, Mackenzie is credited as a co-founder of Fort Chipewyan. He was sent to replace Peter Pond, who among other negative qualities had been known to have a bad temper and occasional violent streak. (He was largely believed responsible for the death of a rival trader.) Mackenzie was to learn something from the older explorer that probably set in motion his grand explorations. Pond believed that a nearby river led to the Northwest Passage. Mackenzie was so taken by the possibility that two years later, in 1789, he set off with trappers, Indian guides, and their wives to follow the river. What we now know as the Mackenzie River was followed by this group of intrepid explorers for 1,000 of its 1,100 miles. When they finally arrived at its mouth, instead of the Northwest Passage they found a new route that led to the Arctic Ocean!

It would have to have been around the time he settled in at Fort Chipewyan that he first got married. It’s very difficult to uncover mention of Mackenzie’s first wife, but the following, with credit due and given to Dorthea Horton Calverley (the Calverley Collection is her namesake), may help. In her thoroughly researched piece on Mackenzie, in discussing how he had “to learn to live Indian fashion”, she mentioned something that had been reported from a fur trader and writer named Godsell. Apparently a Metis woman a ‘Black’ Mackenzie from the Peace River area, had claimed descent from Mackenzie.

The man the explorer Mackenzie was driven; he was both physically and mentally strong. He was a taskmaster. About this, Joseph Burr Tyrrell said he was “a man of masterful temperament, and those who accompanied him, whether white men or natives, were merely so many instruments to be used in the accomplishment of any purpose which he had in hand.” Despite or because of that — and we know the following from his journals — Mackenzie inspired loyalty. He was a great leader, even over-confident. In one journal entry he wrote “My Men … declare themselves now and at any time ready to go with me wherever I choose to lead them.”

Thus undeterred following what he considered to be a failure after his first expedition (certainly, we know the North West Company wasn’t too impressed with it), he returned to England in 1791 to improve his cartography and navigational skills. This was to prove the impetus for his greatest exploration. A year later — it was the spring of 1792 — Mackenzie returned to the Fort, to again set off in search of the Passage.

He and his guides and crew canoed up the Peace River. This lengthy journey, interrupted for the winter where they stayed at Fort Fork (this would later become the province of Alberta), they continued further up the river the following spring, and began to travel the Parsnip River. The journey bore on, and the party crossed the continental divide; following that, they travelled down the Fraser River (now the province of British Columbia), where they abandoned canoe and walked west. Mackenzie was wisely depending upon his Indian guides to keep on track. That same year the group returned to Fort Fork.

Mackenzie published an account of his explorations, Voyages from Montreal, in 1801. In the book, he urged the British to seize control of the Northwest through the building of more forts. It was the next year that he was awarded his Knighthood. Interestingly, it was said that Jefferson’s response to reading Mackenzie’s book was to send explorers Lewis and Clark out in 1803 to find an easier trade route to the Pacific.

Mackenzie was married twice, and most likely his second marriage caused a stir: it was in 1812, when he was 48 years old. His new bride, Geddes Mackenzie (one of two twin daughters of George Mackenzie) was only 14 years old! They went on to live between London and Avoch. They had a daughter in 1816, and two sons; one in 1819, and the other a year later. Mackenzie’s quick physical decline has for the most part been attributed to Bright’s disease. After seeking medical advice on his condition in Edinburgh, he died suddenly on his way home to the Avoch estate in early 1820. 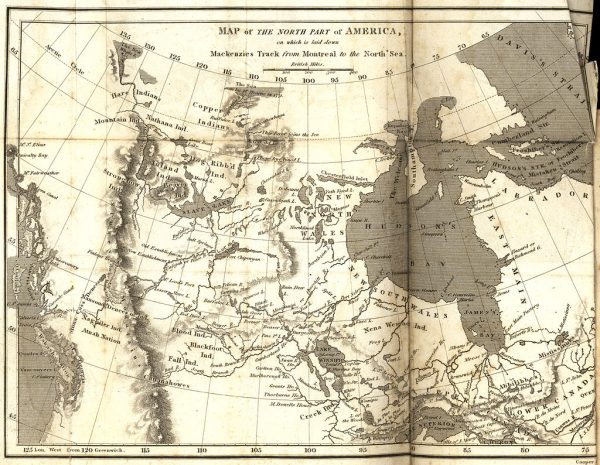