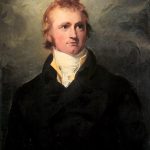 Sir Alexander Mackenzie, born a Scot, was knighted by King George III in 1802 for his achievements in exploration (founding of the Northwest Passage).