“But for me personally, right now, I have no aspirations at all.”

So stated Chris Hadfield in a mid-May, 2013 interview with The Canadian Press. Don’t worry … it’s not what you think. His answer was in response to whether or not he was interested in entering the Canadian political arena. Phew! Actually, he went on to talk about a few other priorities in the interview. But in the meantime, much—an incredible amount—must be said about astronaut/superstar Chris Hadfield. 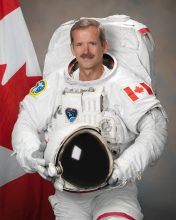 Chris was born on August 29, 1959, to Roger and Eleanor Hadfield, in Sarnia, Ontario, and raised in the Greater Toronto Area (GTA), in Milton. He’s married to Helene, his high-school sweetheart, and they have three adult children. Speaking of high-school, he attended his in Oakville, Ontario and then later graduated from Milton District High School as an Ontario Scholar (in brief, an Ontario Scholar means a student has achieved an average of 80% or higher in their best six Grade 12 courses).

At the tender age of nine years old, Chris knew he wanted to be an astronaut: it was the night of the Apollo moon landing! Many readers can relate to that night, and remember exactly where they were at the moment.

His post-secondary education and training was prodigious and thorough (an understatement), and we’ll get to that in a moment. Did you know in addition to his most recent mission—Expedition 35, to the International Space Station (ISS)—he had been involved with NASA for several years? He’s also a highly decorated Canadian, in many ways. The Order of Ontario (OOnt) is awarded to any current or past Ontario citizen for their “conspicuous achievements in any field”. Hadfield has an OOnt. Further, Chris was awarded the Meritorious Service Cross (MSC). This is awarded to individuals, Canadian or foreign, who have performed an action “in an outstanding manner that brings great benefit or honour to the Canadian Forces or to Canada.” Finally, members of the Canadian forces who have performed “Long service” and have “good conduct” are eligible for the Canadian Forces Decoration (CD). It’s usually given after a dozen years or service. Hadfield has one of these too.

Even before completing high-school, Chris had earned a glider pilot scholarship at age 15, courtesy of the Royal Canadian Air Cadets, and at age 16, he earned a “powered pilot” scholarship. From high school, she entered the Canadian Armed Forces, spending two years at Royal Roads Military College, and then another two years at Royal Military College. It was there he received a degree in Mechanical Engineering. Around the same time (before graduating), he underwent basic flight training at CFB Portage la Prairie. Continuing to excel in all of his training, he took special honours in 1983 as the top graduate from Basic Jet Training at CFB Moose Jaw. Beyond even this, he trained as a tactical fighter pilot, and on completion, flew CF-18s with the 425 Tactical Fighter Squadron (flying intercept missions for NORAD). In this, he was the “first CF-18 pilot to intercept a Soviet Tupolev Tu 95 long-range bomber flying over the Canadian Arctic.”

In his 2012/2013 NASA mission, Chris gained much adoration, attention, fame, and respect as an affable, talented, articulate, and interesting member of the ISS. Both mainstream and traditional media went crazy in their coverage of Hadfield, as he did everything from tweet constantly on his Twitter account (@Cmdr_Hadfield, if you’re interested), take exceptional and many photographs, do more scientific experiments than any astronaut had before him, and even, at the end of his journey, do a cover of David Bowie’s Space Oddity.

The video is stunning in every way, has been viewed by tens of millions of people. It may make you believe Hadfield should have gotten into music much sooner!

Back to Chris’ remarkable training, and what eventually led him to getting involved with NASA.

The U.S. Air Force Test Pilot School (Edwards Air Force Base) saw Hadfield in the late 1980s. For a time, he served as an exchange officer with the U.S. Navy, and during a period of several years, he ended up performing some research work for NASA. The list of Chris’ accomplishments really does go on and on, and is fascinating, but we need to get into Warp speed at this point, in order to arrive at his most famous mission to date. So in brief: Chris did post-graduate research work in 1993, and obtained a master’s in aviation systems. From the time his odyssey began, to the 1990’s, he had flown over 70 different types of aircraft. In 1992, Hadfield was selected from a group of over 5,000 applicants to become one of only four new Canadian astronauts.

One of the facts anyone who has followed Hadfield’s journey has learned is that re-adjustment to Earth’s gravity isn’t an easy thing. For starters, on emergence from the landed Soyuz space capsule, he and his crew had to be carried out. In fact, right after landing, as reported by CBC News’ Technology and Science division, Chris had remarked on how odd it was to see “dirt and grass where space had been moments before.” But besides an abrupt and rough landing, there are several challenges, lasting potentially for several months that must be overcome by the astronaut’s body. For example:

The “weightless tongue” syndrome! It’s true, as Hadfield reports he immediately had to learn to speak again, as he felt for the first time in months the weight of his lips and tongue.
Even lying down on an exercise mat, the returned-to-Earthling may feel as if s/he’s being pressed into the ground by the weight of two people.

A sore back, neck, and head. Chris literally had to wear a special g-suit to “squeeze the blood back up to his brain.” After all, he hadn’t had to support the weight of his head for months.

This amazing astronaut didn’t start out at NASA flying spacecraft around the galaxy.

Early years at the space agency saw Chris address technical and safety issues for Shuttle Operations Development, be the voice of mission control to astronauts in orbit for 25 space shuttle missions, and represent and coordinate CSA astronauts as Chief Astronaut. It wasn’t until after many more challenging and fascinating tasks, that in 2010, NASA announced Hadfield would become the first Canadian commander of the International Space Station, leading Expedition 35 after its launch in late December of 2012. The rest—at what may still be called an early point in his extraordinary career—is history.

Whether or not Chris Hadfield gets involved in politics, which wasn’t the first (or even second or third) thing on his mind when he returned to Earth in May, 2013, he’s made an indelible mark in history. We wonder how many people will follow his footsteps into space, much as they did for his fictional counterpart on the Enterprise.