You are here: Home / Patriotic Patter / Canadian Symbols / The Beaver 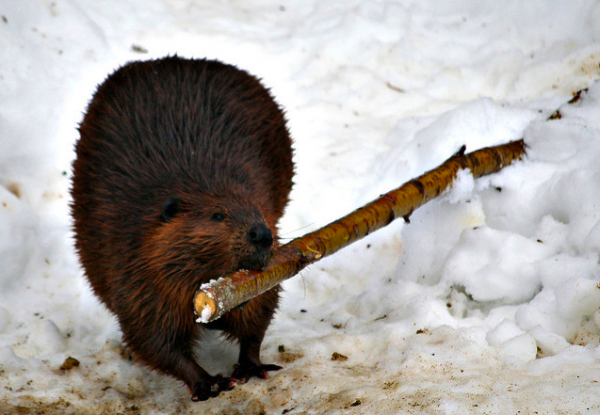 You would think with the size and wilderness of Canada that the animal most associated with our country would be the moose, or the bear. But no, it’s the quiet, unassuming, hard working beaver………..actually, maybe it’s a perfect representation after all…

But, how did the beaver become “our animal?” Famous enough to grace our nickel and receive official Canadian emblem status. Truth be told, it is a sordid story beginning with greed and death in the 1600’s.

Europeans travelled to Canadian shores, and instead of the spices they had hoped to find, they discovered a country teaming with busy little beavers. Not a big deal except, fur hats were becoming all the rage. As the popularity for beaver chapeau’s grew, the European population of beavers declined. As a result, the exploration of Canada was largely due to the furry little creature with the flat tail.

France’s King Henry IV thought beavers were a great way earn an income while building a new empire on Canadian shores. The Hudson’s Bay Company, Canada’s oldest and longest running business made so much money from the fur industry that they added four beavers to their coat of arms in 1678. A coin was developed around the same time that was equal in value to one beaver pelt.

The reason beaver fur was so sought after for hat making is because the fur has little barbs on the end of each hair; when pressed together they become like felt and is probably what keeps the beaver dry and warm while swimming.

By the mid-19th century the beaver had almost been trapped into extinction – it was estimated that Canada was home to six million of Canada’s largest rodents prior to the fur hat fashion season. When the demand for beaver pelts was at its highest, 100,000 pelts per year were being shipped to Europe. Fortunately for Canadians – and the beaver – fashions change; eventually beaver was out and silk was in.