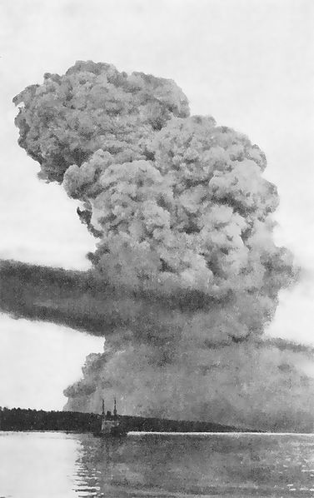 Prior to Hiroshima, the worst man-made explosion occurred on December 6, 1917, at 9:05 am in the town of Halifax, Nova Scotia. Two thousand people were killed, 9,000 were injured. Three hundred and twenty-five acres were destroyed. What caused this devastation?

World War I was raging in Europe but Halifax was prospering as a jump off port for troops, supplies and munitions. A busy port with lots of people. That morning A Belgian ship, the Imo was leaving the harbour, the French, Mont Blanc was arriving. The Mont Blanc was filled with TNT, gun cotton, benzol and picric acid. Enough combustibles to blow up a city.

As a result of traffic in the channel the Imo was forced to the wrong side of the channel, and misunderstood signals between the 2 ships resulted in a collision.

The crew of the Mont Blanc knew what they were carrying. They immediately lowered their lifeboats and headed in the opposite direction of Halifax. The damaged ship started to burn from sparks lit during the impact. The moving bomb floated towards Halifax while most of the citizens watched it come toward them with interest.

When it exploded at 9:05 am, much of the area was levelled. Then the fire started and burned a great deal of the city. Portions of the ship were found miles from the harbour.

Every year on December 6 at 9am, the Memorial Bells are rung in remembrance.