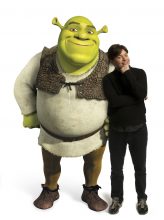 Where does one start with quotes from Canadian funnyman Mike Myers? How about with a quote from perhaps his most well-known creation, Austin Powers:

What makes a guy like Myers sexy? Good looks? Is he sexy? Not so; at least not according to Myers’ himself. In an AskMen interview a few years ago, he had this to say about the success question:

“I’m basically a sexless geek. Look at me, I have pasty-white skin, I have acne scars and I’m five-foot-nothing. Does that sound like a real sexual dynamo to you?”

About ever being the imp, he said this:

“Silly is you in a natural state, and serious is something you have to do until you can get silly again.”

Success hasn’t eluded Mike, but he’s self-effacing about it …

“I still believe that at any time the no-talent police will come and arrest me.”

Myers has an English, Irish, and Scottish background. He draws an interesting parallel between Canadians and Scots in this quote:

“I think that Scottish people, like Canadians, are often misunderstood and what I like about my Scottish friends and relatives is how quickly it can go from love to anger. It`s a great dynamic.”

One of his earlier and funniest characters is Wayne Campbell of Wayne’s World fame. Both the Wayne and Garth characters have lots of funny lines. We thought we’d leave you with these three, from Myers’ portrayal of Wayne:

“Garth, marriage is punishment for shoplifting in some countries.

“If it’s a severed head, I’m going to be very upset.

“I once thought I had mono for an entire year. It turned out I was just really bored.”