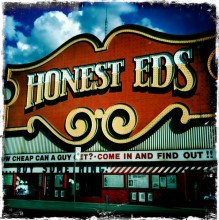 Honest Ed lived life to its fullest, but was modest. Nor did he shy away from mortality; in fact, he said many things about that. Here are just two of them:

“I would then like my body cremated and the ashes put in an hourglass.”

“I would then like someone sitting on the throne to keep turning the glass up and down, up and down, and the employees would point to the hourglass and say, ‘There’s Ed, he’s still running.’”

Ed’s portrayed his own self image in funny ways. For example:

“I’ve got curly hair, I’m short and I look young for my age.”

The next quote is sourced from the Globe and Mail. Ed was always being asked about his value, his net worth, how much money he had, and so on. In response he once said:

“I never like to talk about money.
I don’t think it’s important once you are not hungry. After a while, you’re nothing but a caretaker or a custodian.”

Mirvish was required by the City of Toronto to provide parking access for his many establishments and venues. He knew the value of them too…

“Parking may be the best business in the world. I can’t think of a better one. You employ one person to simply sit there and take in cash. You provide no service, no goods, no nothing – except expensive space!”

As soon as the 10-year lease arrangement with the Canon Theatre ended, Ed’s son David paid tribute to his father in a very public and very appropriate way. The theatre was re-named Ed Mirvish Theatre, and in announcing it David said:

“This may be the most personal and the most important announcement I have ever made in my professional career”.

And Ed himself said of his business success:

“In spite of little formal education and very limited or practically no financial base, it has been possible for me to go from Dundas Street to Buckingham Palace”.