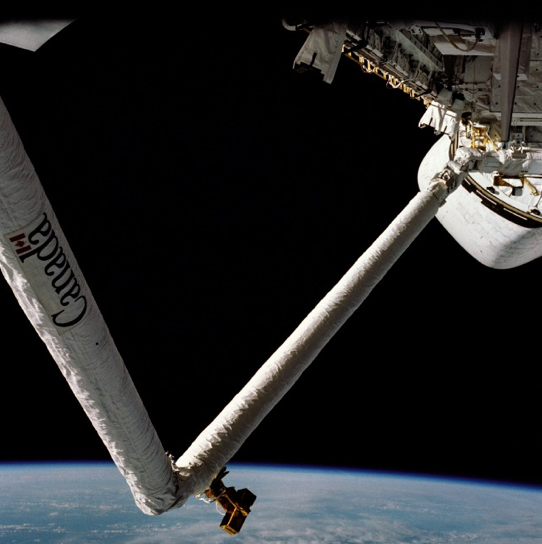 Although Canada has been involved with the space race since the beginning, nothing has made our national pride glow like watching the space shuttles and seeing the big letters CANADA written across the Canadarm.

The Canadarm was first launched into space on November 13, 1981 as part of Columbia. During that mission, the Canadarm successfully flexed its muscles and secured its position in the future of space travel.

It was developed by Spar Aerospace (now called MDA Space Missions) with the National Research Council and modelled after the human arm. Known as a Remote Manipulator System, it could lift 30 tonnes in space while being monitored and operated from the indoor shuttle flight deck.

Canadarm 2 was introduced as a new and improved sibling in 2001. Back in 1987, when documents were signed between countries to work towards a permanently manned Space Station, Canada agreed to provide a Mobile Servicing System (MSS). The MSS was an integral part of the Space Station from the beginning, it was used in the assembly, maintenance and servicing of the Station. In return, Canadians have had full use of the Station and assist with its management.

Canadian Astronaut Julie Payette operated the new arm on its first mission and explains how she used it in the following excerpt from a NASA Preflight Interview:

“This arm flies like an airplane, it’s a six-dimension arm where you can rotate the tip of the arm, so you can translate that tip along the cargo bay of the shuttle and up the stack of the International Space Station. It is an absolute joy to fly. Right after the space walk is complete is when I am timelined in the flight to go on the controls of the Canadarm, as we call it in Canada, or the remote manipulator system. I will use the camera, which is mounted at the end of the tip of the arm, to survey all the targets that are placed on the Space Station, the space vision target. I survey them to see if they’re in good shape, any problems with them, if they’ve been scratched, and if there are bubbles in the material.

The reason why the people from the space vision system program require that very thorough survey of every single target on the Space Station is that each target will be used on the next flight to manipulate and dock pieces of equipment together. When the operator of the arm will be blind with respect to the work site, he won’t be able to see the interface, so the space vision system becomes critical. And because the targets are critical to the operation of the space vision system, we want to make sure they are in good shape before we use them operationally and actually have several tons of equipment coming in contact with the Space Station.”

“The Canadian contribution to the International Space Station, the hardware contribution, is a small piece with respect to the big structure, but an essential one. Actually, the assembly and maintenance of the International Space Station does depend on a new robotic system that we call the Mobile Servicing System. It is a very advanced space robotic system that Canada has designed, and it comes in several pieces. It is a robotic arm, the main pieces, that we call the SSRMS for the space station for the remote manipulator system. And this big arm will sit on a platform that will provide the power and the necessary data and command path for an operator inside the station to control that arm.

On that platform is a mobile MSS Space System, which will then sit on a carrier. It’s basically a moving carrier that will be mounted on rails and be able to move across the length of the Space Station. This is so that the operator inside the space station can position the robot arm at the proper work site from one end of the solar batteries to the other end. That’s called mobile transport and it’s also part of the mobile servicing system. And this will be used with the remote manipulator system, the robotic arm, to move crewmembers around when they have to perform a space walk. It will be used to put big pieces together during the assembly phases, but also to do all kinds of maintenance work: carrying equipment, carrying the orbital removal unit and things that we can change out and then move across the Space Station. It will also be used with its camera to do some inspection and survey. So it’s an essential part of the construction and assembly of the International Space Station.” 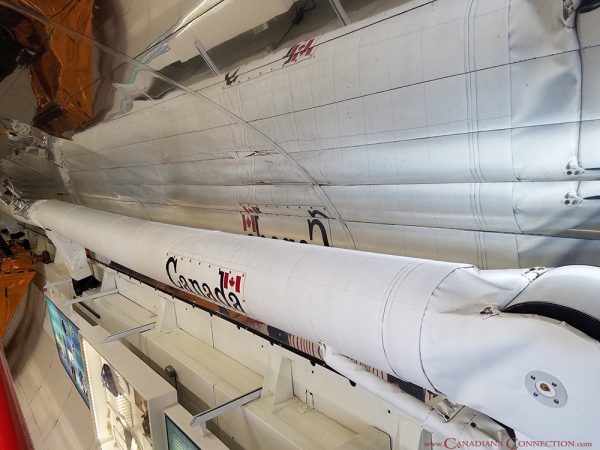