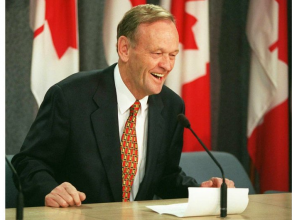 Prime Minister Chrétien is a lawyer by trade, having acquired his degree from Laval University in Quebec. He initially practiced law with the firm of Chrétien, Landry, Deschênes, Trudel and Normand in Shawinigan.

In 1963 Chrétien was elected for the first time to the House of Commons and held many positions within the Canadian Government.

Prior to the 1997 election a Globe & Mail biographer wrote the following about Chrétien:

“Jean Chrétien in youth is small, skinny, deaf in one ear, deformed at the mouth, slightly dyslexic, poor of pocket and intellectually unadorned.”

Appears as though ‘le petit gars de Shawinigan’ didn’t let anything stop him from achieving his dreams.