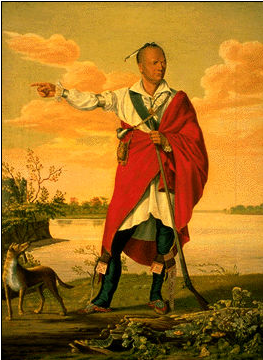 Although Brant was born in the United States, his life had an impact on Canada that can be seen in the city of Brantford, which is named in his honour.

In 1742, Theyendanega (Brant’s birth name) came into the world knowing he was a Mohawk Chief. Chief Brant attended Moor’s Charity School for Indians at Lebanon, Connecticut, where he learned to read and write English. He also studied western literature and history.

Brant’s sister married Sir William Johnson, the British superintendent of the northern Indians of America which may explain Brant’s close allegiance with the British cause. Brant was key to organizing the Mohawk, Cayuga, Seneca and Onondaga tribes to fight for the British during the US War of Independence. Brant became a British Officer and during the time between 1775 and 1781, he is accredited with having won several major battles.

The Six Nations Reserve remains in that area today. Brant also was important in establishing the First Episcopal Church, sawmill and school on the reserve. He was very religious and worked as an interpreter to a missionary. He also interpreted bible passages into the Mohawk language.