According to the last Canadian Census (2006) of metropolitan areas, Ottawa (or Ottawa-Gatineau to be precise) is the fourth largest Canadian city, coming in with a population of approximately 1,131,000.

The geographical size of Ottawa is approximately 1,800 square miles (or 2,800 square kilometers). Much of the Ottawa area — over 90% — is in a country setting. The Rideau Canal runs through Ottawa, and on the other side of that, the Ottawa River takes over. 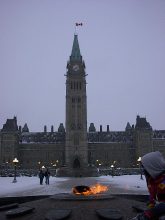 Ottawa is the nation’s capital, and therefore the seat of government. Canada’s head of government (not head of state, as that post is held by the Governor General) is the Prime Minister. The current Prime Minister, Stephen Harper, lives at the official residence at 24 Sussex Drive in Ottawa. Parliament Hill (where the Parliament of Canada conducts its business), is divided into the East Block, Centre Block, and West block. It is conveniently located on the southern banks of the Ottawa River, and is available to the public for tours (which are free). The Centre Block is done in modern Gothic Revival style, while the East and West Blocks are of a Victorian High Gothic style. Approximately 3 million people visit “The Hill” annually. One of the most spectacular places to visit on The Hill is the Library of Parliament. This building in its current location originally opened in 1876.

Like most other Canadian cities, Ottawa experiences the full four seasons every year. Temperatures range from a high of 90° F (32° C) in the summer to lows approaching -40° F (same in Celsius) in the Winter. But all seasons are wonderful in Ottawa, and each offers something special. In the spring there’s the very popular Canadian Tulip Festival. In the winter, there’s the internationally known “Winterlude”; otherwise known as the Ottawa Winter Festival. One of the most unique things that happens at Winterlude is that you can outdoor skate on what’s billed as the “world’s longest skating rink” (that would be the Rideau Canal).

Visit Ottawa in any season to indulge and enjoy in its numerous attractions. In addition to things like the Canadian Tulip Festival and Winterlude, any time of year is a good time to visit its famous Sparks Street Mall. This has quite a history. Located just one block south of Parliament Hill, it was founded in the early 1800’s. There are over 30 buildings of heritage and historical significance on Sparks, which has been traffic-free for decades. It’s billed as “Ottawa’s Historic Outdoor Pedestrian Mall”. Artisans and outdoor cafés are in abundance on Sparks, and the summer is one of the best times to enjoy these. 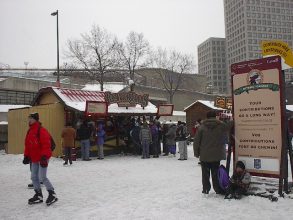 So there’s Sparks Street, The Hill, the Rideau Canal, and the Ottawa River. But that’s not all there is to the charm and magic of Ottawa. ByWard Market is a historic farmers’ market, which at night transforms into a gathering place chock-full of clubs and restaurants. Anytime a visiting dignitary visits Ottawa, she or he will inevitably end up at ByWard. In the winter of 2009, President Barack Obama stopped in to do some shopping at the ByWard Market, grabbing an infamous “Beaver Tail” to munch on while there. (No, not from a real beaver!) The number of museums in or near Ottawa is quite amazing, and most are worth visiting. There’s the Canadian Museum of Civilization located across the Ottawa River, in Gatineau, Québec (just over a bridge); definitely worth seeing. There’s the Canadian Museum of Nature, in downtown Ottawa. Into dinosaurs? Go the Museum of Nature! For those proud of their military history, there’s the Canadian War Museum. If you’re an art lover, there are many places to go, but perhaps the most famous is the National Gallery of Canada. If you’re into money—and who isn’t?—a visit to the Royal Canadian Mint is in order. The Mint is located in Central Ottawa, and is the place where master tooling is done to create the dies that strike coin designs for both circulation and commemorative issue coins.

Is a trip to Ottawa on your list of things to do? If so, you take the time to visit a website that will provide you with the most information about this spectacular Canadian City. Point your browser to the Ottawa Tourism site. From there you can find out what’s going on at any given moment, or even book a hotel or package deal.