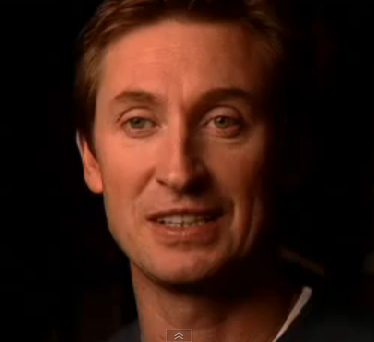 ‘The Great One’, Wayne Douglas Gretzky, was born (and raised) in Brantford, Ontario, Canada on January 26, 1961. The story of this hockey legend, who turned 50 in 2011, is fascinating and exciting.

Wayne’s dad, Walter (often seen at NHL games), built a rink in the backyard of their home when Wayne was six years old. Every day Wayne skated on that rink; practicing, shooting, and stickhandling. Wayne credits his father for teaching him everything he knew about the game of hockey. Wayne played in several leagues as a youngster—often above his age range. And then his hockey life began to explode: as a pee wee player in Brantford, he began to set records (including a staggering 378-goal season). Every year Wayne played better, faster, and at higher levels.

Jealous players and their parents pretty much drove Gretzky out of his hometown, and into Toronto. He was only 14 at the time. Various opportunities presented themselves, and as a young teenager of 15, Wayne played a few games with the Peterborough Petes on an emergency call-up basis. He went on to play a full season in the OHA, and it was around that time he adopted the famous “99” we all associate him with. His time with the OHA continued, on and off, for a couple of years.

Inevitably headed for the NHL, Gretzky joined the Indianapolis Racers in 1978. Still too young to join the NHL (the draft age at the time was 20), he stayed with the Racers until they folded. The Team’s owner, Nelson Skalbania, sold Gretzky to the Edmonton Oilers. Much of the fame, glory, and record-setting we know about today began with Wayne’s association with the Oilers. Surrounded by other hockey luminaries like Mark Messier and Grant Fuhr, the impression Gretzky made on the NHL was nothing short of phenomenal. To quote from Gretzky’s official biography (see www.gretzky.com/hockey/bio.php), “his play was unlike anything the league had ever seen.” Gretzky’s arrival did not go unnoticed, and set in motion an era of spectacular NHL hockey.

In only his second season with the Oilers, The Great One was smashing records all over the place. It was the 1980-81 season when he won his first of seven straight scoring titles. In fact, he broke another hockey legend’s record, by surpassing Bobby Orr’s assists with 109.

In a highly contentious move, Gretzky was traded to the Los Angeles Kings in 1988. There was much rancor directed at Gretzky, his new wife at the time (Janet Jones), and the Oilers’ owner Peter Pocklington for the trade. In the eyes of Oilers’ fans, they had been betrayed.

Wayne, however, continued to do what he did best. He set the tone and pace for hockey in the Kings club, and is actually credited with popularizing hockey in California. For the first time in their history, the Kings’ Forum was being sold out for every game. Gretzky was to take the Kings to the Stanley Cup finals in 1993 for their first time. He was instrumental in eliminating the Toronto Maple Leafs in early playoff rounds during that season.

Gretzky’s NHL career, a tremendous one that lasted to 1999, he was inducted into the Hall of Fame (and at which point “99” was also retired), saw him play for St. Louis Blues (after the Kings), and finally, for the New York Islanders.

In late 1997, Wayne was selected to represent Canada; it was for the 1998 Olympic Winter Games that would take place in Nagano, Japan. While things didn’t turn out well (the coach Marc Crawford did not select Gretzky, the NHL’s all-time leading scorer, for one of the five penalty shots), for Wayne, getting the opportunity to play in this way was a dream come true.

In the year 2000, Mr. Gretzky became part owner of the Phoenix Coyotes. Within a year or so, he became Executive Director for the Canadian national men’s hockey team. (This was to be repeated in 2006, but not with the same success of 2002.) In the 2002 Winter Olympics, they won the gold medal. Following the NHL’s 2004–05 NHL lockout, in August of 2005, Wayne became the Coyotes’ head coach.

Gretzky was not only an ambassador involved in the bid for the 2010 Winter Olympics, he was a major contributor who helped Vancouver, B.C. grab the games. Through an interesting set of maneuvers, Wayne was chosen as the final torchbearer for the Olympic Flame in Vancouver. People streamed into the streets on word they might catch a glimpse of The Great One.

In the annals of NHL history, Wayne Gretzky held forty regular-season records, fifteen playoff records, and six All-Star records. He’s the leading point-scorer in the history of the league.

But the story of The Great One can’t properly be told unless we let you in on some other facts, and ventures, that Wayne has been involved in.

The endorsements he’s received over the years make him one of the most recognizable athletes in the world (they include Pepsi Canada, Samsung Canada, and McFarlane Toys … to name a few). His Toronto restaurant bearing his name is located just feet away from the Rogers Centre, home of the Blue Jays and other sports teams and events. It’s now in its 17th year. In 2007, Gretzky launched Wayne Gretzky Estates Winery (he and his team of winemakers have already won several domestic and international awards). Some of the proceeds of the Winery go to the Wayne Gretzky Foundation. The Foundation that bears his name helps disadvantaged youth throughout North America participate in hockey. In 2008, Wayne hosted the inaugural Ford Wayne Gretzky Classic.

While not without controversy—there was the trade to the Kings, already mentioned, and there was the Coyotes-based gambling scandal (neither Gretzky nor his wife Janet were charged with any wrong-doing)—what we’ll remember most about Gretzky is the phenomenal impact he’s had in NHL hockey, and the amazing work he continues to do to this day to help others to “skate to where the puck is going to be…”