You are here: Home / Patriotic Patter / Canadian Symbols / The Poppy and Remembrance 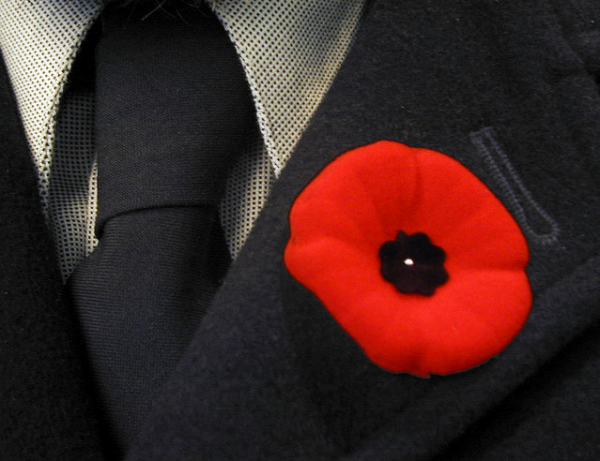 Who, on hearing Lieutenant-Colonel McCrae’s stirring words “In Flanders fields the poppies blow…” doesn’t automatically think of The Royal Canadian Legion’s annual Poppy Campaign? It is, after all, at the very heart of their Remembrance Program. It is due in large part to the Legion’s annual November outreach to Canadians of all ages that we remember. Their campaign is very successful, as over half of all Canadians end up wearing a lapel Poppy because of it.

There are rich stories behind the iconic Poppy, and we’d like to share some of them with you now.

The lapel Poppies currently worn by Canadians made their debut in 1921, and were originally made by disabled veterans. In fact, up until 1996 the Poppy material was made at Vetcraft workshops run by Veterans Affairs Canada. When it was finally not possible for remaining veterans to maintain Vetcraft operations, the Legion took on responsibility for lapel Poppy production. Eventually a production contract was awarded to a private company to do this, but the Legion maintains close oversight of the production.

The history of the Poppy in Canada as we know it, however, precedes their introduction here.

During the Napoleonic Wars in the 19th century, there are records that tell of Poppies growing thickly over the graves of soldiers in the area of Flanders, France. This might be the first recorded connection of Poppy to those who have been killed in wars. Much later—in fact this happened in New York City, in November of 1918—an American teacher, on reading John McCrae’s poem, made a personal pledge to “keep the faith”. She vowed to wear a red Poppy as a sign of remembrance for “all who died.” Two years later, again in America, a French woman learned of Moina Michael’s (the teacher’s) custom. On her return to France, she used handmade Poppies to raise money for destitute children in war-torn areas. It was then that the predecessor of the Legion, the Great War Veteran’s Association of Canada, officially adopted the Poppy as the “Flower of Remembrance”. That was in 1921.

When we wear the lapel Poppy, we’re doing more than thinking of departed loved ones: we’re helping the Legion continue their Remembrance Program. Now here are a couple of facts you may not have known:

Much of our information about Poppies and Remembrance Day comes from The Royal Canadian Legion, and we’d like to publicly thank them for keeping us informed, and for helping us … remember.